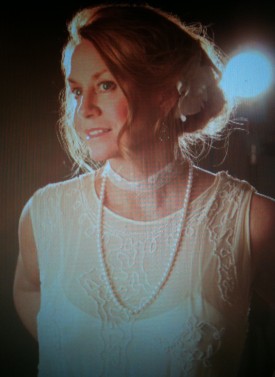 Barbara Rosene has built an unequalled reputation for interpreting the great music of the 1920s and 30s and 40s. She is a passionate vocalist whose interpretations uncover the richness of jazz classics through the subtle, skilled delivery of one truly in love with the genre she sings.

Rosene gives voice to songs in ways that are both gracefully provocative and warmly welcoming. Few singers have her feel for classic material, from all eras of Jazz, interpreting the music with not only a full understanding and love of the original time period but with the rare ability to make the material sound fresh and emotionally relevant today.

In her established career she has shared stages with jazz icons, performing internationally with The Harry James Orchestra, Vince Giordano and The Nighthawks, the late Les Paul at New York’s Iridium Jazz Club, The Woody Allen Band, at The Carlyle Hotel, as well as directing her own New Yorkers, and as guest artist with orchestras and in festivals across the world. She has played such venues as The Iridium, Lincoln Center’s Rose Hall, The Montreal Jazz Festival,  Night Town (Cleveland), Blues Alley (DC), The Arizona Music Festival, Jazz Amarinois, and The Hotel Villa Flori, Lake Como.

Barbara has been featured on Judy Carmichael’s NPR program  ”Jazz Inspired”, and recently on NPR’s “Hot Jazz Saturday Night.” She has been recognized by Backstage Magazine (Bistro Award, 2006), “Jazz Improv Magazine”, and is featured in Scott Yanow’s “Great Jazz Singers.”

Rosene is personally committed to the significance of jazz music in American Popular Song and in America’s roots and spirit. Finding the soul of a song and linking its heart and expression with her own story brings this seductive blonde singer the satisfaction of a career well-spent. Recently she has begun lecturing on The Tin Pan Alley composers and early women jazz singers.

“Do what thrills you. Do what has meaning,” says Rosene, genuinely. “One thing I know is that it really is a privilege to perform. When someone is touched or broadened by something you have given them it is a gift to be able to give back to the world in that way.”

Barbara’s CDs include several on the Stomp Off label, all of which pay homage to the great composers and vocalists of the 1920s and 30s. Including  “Nice and Naughty”, a collection of double entendre tunes, which features Conal Fowkes who’s voice and piano stylings as Cole Porter, were featured in “Midnight In Paris”.  Vince Giordano and The Nighthawks ( Boardwalk Empire) collaborated on Barbara’s first CD entitled “Deep Night”.

Will Friedwald, author of Jazz Singing and Sinatra! has written: “No one evokes more vividly the music of the great singers of the 1920s than Barbara Rosene.”

Barbara’s CDs include releases on the Blues Back, Arbor’s and Azica labels.